Two thirty three Dunellen Ave has an interesting history of its own. Originally it was built in the late 1800s for the "Child's Family". After they moved north of Dunellen, the house was converted into a rooming house and later sat vacant. Ray Sheenan purchased it with a broken roof and without windows. Smaller than it is today, Ray and his wife lived in one apartment upstairs and his brother George, (who also became a funeral director and worked there) lived in the other upstairs apartment. After World War II, George moved to his own home in Arbor and the funeral home underwent its first expansion of many. Always thinking ahead and not resting comfortably on its laurels has made Sheenan Funeral Home what it is today. The arrangement room is where the kitchen once was. On the back wall you can see some of the plaques given to both Ray and Tom Sheenan.

The Funeral Home has just undergone another major renovation and once again, attention to detail has made the funeral home exquisite. The exterior is welcoming and immaculate, the interior in elegantly decorated maintaining their signature level of pristine excellence. 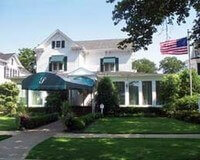